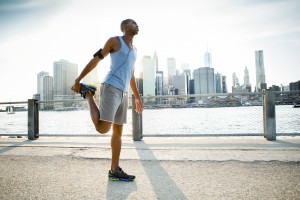 This blog was written by Damien Howell, PT, DPT, OCS.

For example, if the average number of meters swum for the previous four weeks was 8600 meters/week, and the current week was 10,000 meters swum – dividing the chronic load 8,600 meters by the current week of 10,000 meters the ratio is 1.16.  According to the work of Gabbett, the ideal ratio is around 1, this is “in the sweet spot”.  If the chronic load is high (four-week rolling average) the individual has developed fitness.  If the acute load is low (most recent week) the individual is experiencing minimal fatigue.  The individual is well prepared and likely experiencing a positive training response – improved performance.

If the ratios of acute load to chronic load (fitness relative to fatigue) is greater than 1.5, then there is increased risk of injury and/or falling off of performance.

The relative fitness level is going to be relatively low at the beginning of a season or after an injury which inhibits training.  This is time progression of training load needs to be conservative, closer to the 10% level rule.

If the ratio of acute load to chronic load is below 0.8, then the individual is under training.  Being under-trained may increase risk of injury.  In this scenario, the training load needs to be increased.

There are a variety of measures of training load.  There are a variety of methods of measuring training load.  Examples from training diaries are time, distance, intensity, level of perceived exertion of effort.   Cycling has power output devices such as: SRM cycling Power Meters and PowerTap cycling pedals.  Time motion analysis systems that use global positioning system tracking can provide a wealth of data.  Performance testing such as time trials, jump test, and strength testing can be used to measure training load.  Heart rate has been used to measure and monitor training load, such as threshold level for a given work load, and Training Impulse – TRIMP

For the purposes of using the acute training load chronic training load ratio, actual measurements from systems identified above can be used or the units can be converted to arbitrary units to determine relative ratio.

Commercial wearable monitoring devices are becoming more available and prepackaged programs on how to progress training load may be included.  Click here for a great summary of latest models and features on the market.  The question arises on what principal does the application use to recommend progression of the training load.  It may use the standard 10% rule based on the proceeding week.  Consider customizing the program to use the concept of acute relative to chronic training load.

A less expensive system approach is to use a spreadsheet applying the concept of ratio of acute training load (current week) relative to chronic training load (rolling average of preceding four weeks) described by Gabbett.